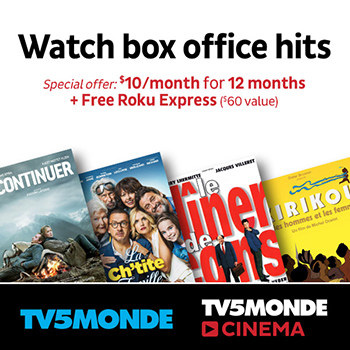 Why France Will Crush the Oscars this Year

Les Misérables, Portrait of a Lady on Fire, Atlantics, and I Lost my Body are among the many inspiring French films that are getting some serious attention this awards season. The last three walked away with trophies yesterday at the LA Films Critics Association Awards and are on to win several more awards before the Golden Globes and Oscar ceremonies.

Los Angeles had a French accent yesterday. Before honoring Bong Joon-ho’s Parasite as the best film of the year (full list of LAFCA winners here), the Hollywood critics first honored Claire Mathon, who won best cinematography for two French films, Portrait of a Lady on Fire (Portrait de la jeune fille en feu) and Atlantics (Atlantique), beating a favorite for the Oscar, Roger Deakins, for the war film 1917. Dan Levy won best score for I Lost My Body (J’ai perdu mon corps). The animated film then went on to win best animated feature, leaving Toy Story 4 empty handed. Finally, in the best foreign film category, Portrait of a Lady on Fire (Now playing in LA and NYC) was given the runner-up position behind Pedro Almodovar’s Pain and Glory.

At the same time, still in LA, the Critics Choice Awards, who always give a good indication of the year's upcoming Oscar nominees, is including I Lost my Body in the "best animated" category. The riveting animated feature will again be competing against Toy Story 4, but also Frozen II. Three French films (out of 5) were also nominated in the best foreign film category: Atlantics, Les Misérables, and Portrait of a Lady on Fire. These dramas will also be against a clear favorite here, Parasite.
The 9-time Oscar nominated French music composer Alexandre Desplat (and two time winner in 2015 and 2018 for The Grand Budapest Hotel and The Shape of Water) was also nominated for his score for Greta Gerwing’s Little Women.
And about those Golden Globes…

Today the Golden Globes will announce their nominees for all categories. This should give us some clues of which films have a fighting chance at the Academy Awards 2020.... and with awards season just beginning, it's safe to say that these four films are not finished accepting accolades within the upcoming weeks. It's a good year for France!