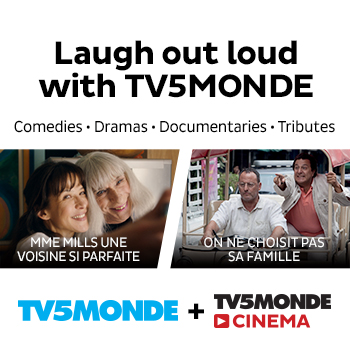 An independent movie and first feature, co-produced and co-directed by Ruben Amar and Lola Bessis, Swim Little Fish Swim, was released in France on June 4, three years after the shooting, delayed by the lack of means. The movie is now out in the US.

Ruben Amar and Lola Bessis are no strangers to New York. He produced and directed two short films in New York. She completed her university studies in literature with a practical cinema focus at NYU and the New School. So, a bit of their personal experience can be found in this bittersweet "New Yorker comedy". Swim Little Fish Swim was mostly shot in English, with small means – the shooting has been restricted to twenty-five days, the scenery is the directors’ apartment in Chinatown, some secondary characters play their own roles and Ruben Amar is an extra for a scene in the bar!

Swim Little Fish Swim is a tender and sometimes ironic look at New Yorker artists who seem nostalgic of the 70s, and also at a confrontation between youthful dreams and reality. It impresses with its spontaneity, and even if it can't avoid clichés, they never appear overdone.

We believe in the characters and we can recognize ourselves in them. We quickly succumb to the charm of the two lead actors, Dustin Guy Defa and Lola Bessis whose acting evokes the natural style of the Nouvelle Vague actors. And we begin to wish a better future for both of them, Leeward, a musician and Lilas, a video artist, who vacillate between nonchalance and determination and waver between cultivating their creativity and the need to make a living.

The other characters, adding the theme of parent /child relationship and the one of couple relationship are equally interpreted and add some depth to the story. The script is thin, the goal is to show only a slice of life, but the montage is rhythmical while letting some time elapse. Only the scenes shot in Paris might have benefited from being briefer. The score, especially the Brooklynite group The Toys and Tiny Instruments portion that accompanies the characters, adds freshness to the movie, as well as the colors of the photography. In a nutshell, a must see movie, inspired by New York and supported by the enthusiasm of its directors.