How about mixing two of your favorite hobbies? Watching French films and cooking French food! We’ve picked out for you seven mouth-watering cinema-inspired French recipes.

Slice potatoes as thinly as possible, no more than 1⁄4 inch thick.

STEP UP TO THE PLATE – A documentary of the year leading up to renowned chef Michel Bras’ handing over the reins of his three-star hotel-restaurant in the Aubrac Mountains to his son Sébastien.

Mushroom Soup With Toasted Bread (by Michel Bras courtesy of Food & Wine, serves 12) is rich in flavor thanks to a special Bras family trick.

RATATOUILLE (Rent the DVD on Netflix) – Pixar’s feel-good tale about a rat with a sophisticated palate and big dreams of becoming the greatest chef in the City of Light.

John Ratzenberger's Ratatouille Burgers (courtesy of abcnews.com) are a personal creation of the voice actor who plays plump waiter, Mustafa in the animated film. Heat oil in a large pot with a heavy bottom over medium heat. Add onions and sauté until translucent, then add garlic and cook for an additional minute. Once onions are a light golden color, add peppers and cook for five minutes. Mix in tomatoes, tomato paste, thyme, rosemary, basil, bay leaves, salt and pepper. Then add eggplant and zucchini and cook for about 5 minutes.

Reduce heat to low, cover and simmer until vegetables are tender -- about 30 minutes. Remove bay leaf and enjoy!

VATEL (Watch Instantly on Netflix) – Stars Gérard Depardieu as the real-life 17th century chef and royal party planner credited for creating whipped cream. The film focuses on Vatel’s meticulous preparation of an over-the-top banquet held in honor of The Sun King at the Château de Chantilly.

Sole Meunière (courtesy of Barefoot Contessa on the Food Network,serves 2) was on Vatel’s menu, but when the stressed-out chef feared that there wouldn’t be enough fish for the King’s extravagent feast, he took his own life. Talk about a dish to die for… SABRINA — In this Billy Wilder romantic comedy, Sabrina (Audrey Hepburn) is the daughter of a poor chauffeur who is hopelessly in love with one of her father’s clients, womanizer David Larrabee. In attempt to get over David, Sabrina travels all the way to Paris where she learns the art of French cuisine and French sophistication.

The Classic Soufflé (by Michelle Southan at taste.com, serves 4). Sabrina fails miserably at preparing this puffy pastry because, according to her cooking partner, “A woman happily in love, she burns the soufflé. A woman unhappily in love, she forgets to turn on the oven.” 2.  Heat butter in a saucepan over medium heat until foaming. Cook flour, stirring, for 2 minutes or until it bubbles and comes away from the side.

4. Whisk over medium heat for 3-4 minutes or until sauce boils and thickens. Add cheddar and stir until cheddar melts and mixture is smooth.

5.  Remove the saucepan from heat. Quickly whisk in the egg yolks until well combined. Transfer the mixture to a large bowl. Use an electric beater to beat the egg whites in a clean, dry bowl until firm peaks form. Be careful not to overbeat the egg whites.

6. Add one-third of egg white to cheddar mixture. Use a large metal spoon to fold. Repeat, in two more batches, with the remaining egg white.

7. Spoon into prepared dish. Run your finger around the inside rim of the dish. Place on preheated baking tray. Bake for 25-30 minutes or until golden.

CHOCOLAT (Watch Instantly on Netflix) – In this romantic film based on Joanne Harris’s book of the same name, Juliette Binoche plays Vianne, a chocolatier whose new shop full of sinful delights scandalizes the religious members of her quaint traditional French town. 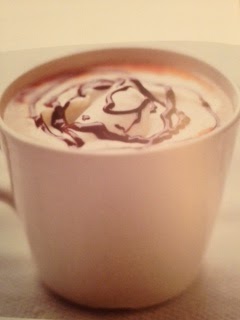 Place the milk in a saucepan, add the vanilla bean, cinnamon stick, and chile, and gently bring it to a shivering simmer for 1 minute. Grate the chocolate and whisk it in until it melts. If you must, then add brown sugar, but do try without it. Take off the heat and allow it to infuse for 10 minutes, then remove the vanilla, cinnamon, and chile. Return to the heat and bring gently back to a simmer. Serve in mugs topped with whipped cream, chocolate curls, or a dash of cognac or Amaretto.6) Serve warm with roast meats or place in a refrigerator to chill if serving as a dessert with whipped cream.

MARIE ANTOINETTE – Set against a modern soundtrack of punk rock and electronic music, Sofia Coppola’s vamped up version of the Austrian Queen’s legendary life at Versailles takes us from her ascent to the throne to her struggles to produce an heir to her selfishly lavish spending that ignited the French Revolution.

Chocolate Macarons (from The Sweet Life in Paris by David Lebovitz, makes about fifteen cookies). While Marie Antoinette (Kirsten Dunst) found the rituals at the court tedious, unnecessary and stifling, she happily welcomed the fine food and fancy outfits. Coppola, therefore, littered the set with Ladurée Macaron pyramids in pastel shades to accentuate the Queen’s love of stylish pretty things. 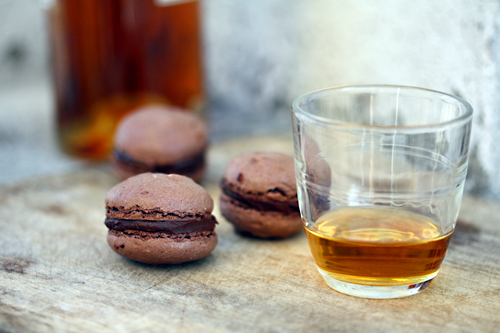 Preheat oven to 350º F (180º C). Line two baking sheets with parchment paper and have a pastry bag with a plain tip (about 1/2-inch, 2 cm) ready. Grind together the powdered sugar with the almond powder and cocoa so there are no lumps; use a blender or food processor since almond meal that you buy isn’t quite fine enough. In the bowl of a standing electric mixer, beat the egg whites until they begin to rise and hold their shape. While whipping, beat in the granulated sugar until very stiff and firm, about 2 minutes. Carefully fold the dry ingredients, in two batches, into the beaten egg whites with a flexible rubber spatula. When the mixture is just smooth and there are no streaks of egg white, stop folding and scrape the batter into the pastry bag (standing the bag in a tall glass helps if you’re alone). Pipe the batter on the parchment-lined baking sheets in 1-inch (3 cm) circles (about 1 tablespoon each of batter), evenly spaced one-inch (3 cm) apart. Rap the baking sheet a few times firmly on the counter top to flatten the macarons, then bake them for 15-18 minutes. Let cool completely then remove from baking sheet.

To make the chocolate filling: Heat the cream in a small saucepan with the corn syrup. When the cream just begins to boil at the edges, remove from heat and add the chopped chocolate. Let sit one minute, then stir until smooth. Stir in the pieces of butter. Let cool completely before using.

Assembly: Spread a bit of batter on the inside of the macarons then sandwich them together. Let them stand at least one day before serving, to meld the flavors. Store in an airtight container for up to 5 days, or freeze. If you freeze them, defrost them in the unopened container, to avoid condensation which will make the macarons soggy.

If you’re hungry for even more foodie films, check out La Grande Bouffe, Babette’s Feast, and Delicatessen, or Romantics Anonymous.