The Five Films to Watch on TV5MONDE in March

TV5MONDE is celebrating the International Month of Francophonie with exciting films throughout March, but also a selection of flicks that keep you on the edge of your seat, jaws dropped.

If you love the rich culture, history and music of Nolo, On Va Continuer! is an absolute must! An invigorating look at the Louisiana French and Cajun lifestyle fighting to stick around.

Grammy-winning Louisiana band Lost Bayou Ramblers push the boundaries of Cajun music and breathe new life into the Louisiana French language through their genre-bending music. On the recording journey of their latest album, Kalenda, the Ramblers let us explore the modern Cajun lifestyle, and discover that this “dying” language may not be so dead after all. 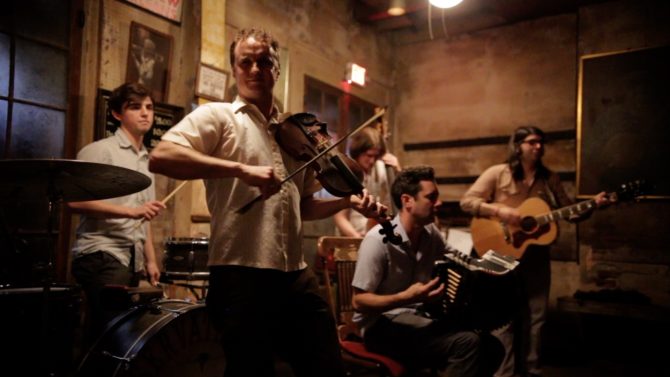 Perfect timing for a retro girls crusade for their right to play football! All characters in this flick are endearing, relateable and completely memorable.

Reims, 1969. Paul Coutard, sports journalist and serial womanizer, provokes his editor into organising a women's football match. He is unexpectedly helped by Emmanuelle, the personal assistant, his best enemy in the office. Together they will go down in history by creating the first ever women's football team!

“It’s funny, smart, charming and delivers plenty of good vibes : you won’t be able to resist such a comedy” – Télé 7 Jours

An incredible psychological thrill ride, complete with performancess that master subtletey and building tension. To aid in the creepiness factor, the film is set amongst grey, wet and cold lighting and textures.

David, an unassuming family man, is suspected of murder. During their investigation the police discover that beneath his irreproachable exterior, David's life is not quite as respectable as it appears. Doubts begin to creep into the minds of those closest to him, and clans start to form...

“The Benefit of the Doubt is a real group film, and the casting only adds to the realistic portrayal of a friendship group in disarray."- Cineuropa

L'atelier encompasses the typical French philosophical, political and social discussion and runs with it. An especially relevant story of truth and perspective, romance is then mixed in for a truly provocative narrative.

La Ciotat, summer 2016. Olivia, a Parisian novelist, is running a writing workshop for a group of youngsters. Amongst them, Antoine remains apart. Under the influence of far-right nationalist propaganda, fascinated by weapons and violence his attitude shocks the others. As for Olivia, she wavers between attraction and repulsion... • La Ciotat, été 2016. Olivia, une romancière parisienne, encadre

"The Workshop never lets us know exactly what anyone really thinks. These tantalizing clues only add to the film's allure." - Washington Post

A ghost story with a deep and complex underbelly. With expert performances by the entire cast, including the 10-year-olds.

Montreal. 10 year-old Félix is gradually realising all the dangers that surround him in this earthly existence. Hypersensitive, the slightest problem immediately has him imagining the worst. But when the city is faced with the worrying disappearance of young boys, his very worst nightmares suddenly seem to come to life... • Montréal. Félix, 10 ans, prend peu à peu conscience

"The doubts, fears, and yes, horrors of life beneath the comfortable surface of a Montreal suburb are subjected to the quizzical, pained gaze of a sensitive 10-year-old in Philippe Lesage's laconic, unsettling The Demons." - Hollywood Reporter